Remember the brave soldiers who gave their lives
For our freedom,
God Bless them all these courageous
Men and women.

They fought on land,
Others at sea,
Sacrificing their lives for
You and me.

Schools and offices respect these heroes
From the past,
By flying our beautiful flag
At half-mast.

As you watch the parade and hear
The trumpets play,
Please think about what we celebrate on
Memorial Day. 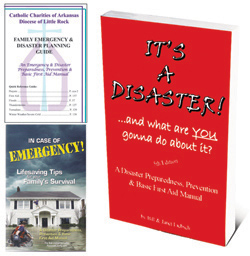 This past Friday, we announced our company is discounting our disaster preparedness book pricing through September 30, 2011 and donating 10% of all orders to relief efforts across the U.S.

“So many communities are being impacted by Mother Nature and the bad economy that we wanted to do something to help our fellow Americans and our partners involved in disaster relief, so this was a perfect win-win,” said FedHealth President and CEO Bill Liebsch.

Liebsch, co-author and publisher of IT’S A DISASTER! …and what are YOU gonna do about it? is discounting his 266-page preparedness book more than half off the retail price through September 30th.

In addition, volunteers, schools and faith-based groups can still earn up to 50% of the discounted price through a variety of fundraising programs.

As an added benefit, FedHealth will donate 10% of ALL orders to volunteer groups – like Chasing4Life’s Disaster Response Team, The Disaster Preparedness and Emergency Response Association (DERA), U.S. First Responders Association’s DRT and others – throughout the summer.

Disaster education and relief groups are being stretched thin lately but the kindness of these volunteers can never be repaid. “Our hope is to help offset some of their costs so they can continue to help communities prepare for and recover from disasters of all kinds,” said Liebsch.

Since the terrorist attacks on September 11, 2001 we have repeatedly heard officials say “be vigilant” or “stay vigilant”. And now, due to recent incidents, those warnings are being repeated – for good reason since there are radical extremists out there who want to destroy the Western way of life.

But how many of us really know what “being vigilant” means?

The above definition comes from Dictionary.com … and my dictionary defines it as “watchful, alert, observant, guarded, attentive, awake, cautious, careful, wary, on the alert, on the lookout” … among other things.

So now the question is … how many of us actually are vigilant in our day to day lives?

Here’s a test for you. Next time you’re walking around out in public take a few minutes and pay attention to what you do.

Are you one of those people who go around with a phone (or bone) against your head chatting away constantly … or do you stuff buds in your ears to drown out traffic and people noise with tunes? Or maybe you daydream a lot … or worry about upcoming business meetings or how you’re going to juggle all the errands and get your kids to ball practice on time.

All of these are typical, normal thoughts and it’s true – a majority of people don’t pay attention to their surroundings. And that’s a strong testament to how great our country is since we don’t live in fear.

Plus Americans are very fortunate since we have a strong, talented network of First Responders who rapidly respond to threats and incidents.

But keep in mind the U.S. has approximately 800,000 active Law Enforcement Officials (includes Police & Sheriff), 1.1 million Firefighters (over 70% are volunteers) and 210,000 EMT / paramedics.

That means there are about 2.1 million First Responders supporting over 310 million people..!

And there are millions of active military personnel, Federal agents and observant citizens you could add to the mix … but the numbers of eyes and ears could increase exponentially if more people would pay attention.

So … what can you do to become more vigilant..?

Again, people need to remain calm about the threat of terrorist attacks since they are a low risk possibility. Officials are working hard to protect communities, but there are only so many of them on the streets. If the general population would become more vigilant, it could increase the number of eyes and ears on the lookout and make our neighborhoods and country stronger.

Well .. I’m (finally) sticking my big toe into the blogosphere. I’ve contributed some articles in the past for blogger friends and currently post on the Arizona Preppers Network and American Preppers Network blogs … but it’s time to get one going for our company and projects.

Back in 1999 my hubby (Bill) and I wrote and released a book called IT’S A DISASTER!… and what are YOU gonna do about it?  We now have hundreds of thousands of copies in print and are up to a 5th Edition, but we’ve been doing it all quietly behind the scenes.

We customize and sell our book in bulk direct to Government agencies, businesses, schools, nonprofit groups and others … and offer the paperback and ebook to consumers too. But our primary focus is our programs that help fund and support nonprofits, schools and First Responders which I’ll be describing in more detail soon.

For now, visitors can learn more at www.itsadisaster.net

Our goal with this blog is to share ideas and updates about our book and programs .. and to provide links, news and resources about disasters, emergencies, first aid and preparedness in general.

Stay tuned and stay safe out there, j & B