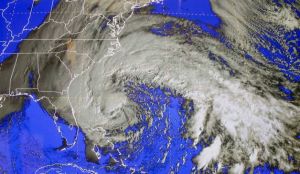 Hurricane Sandy remains on target to bring life-threatening storm surge flooding to the mid-Atlantic coast, including Long Island Sound and New York Harbor. Winds of near hurricane-force are also expected at landfall.

This superstorm that could menace some 50 million people in the most heavily populated corridor in the nation, with forecasters warning New York could be in particular peril.

“The time for preparing and talking is about over,” Federal Emergency Management Administrator Craig Fugate warned as Hurricane Sandy made its way up the Atlantic on a collision course with two other weather systems that could turn it into one of the most fearsome storms on record in the U.S. “People need to be acting now.”

Governors from North Carolina to Connecticut have declared states of emergency. Delaware ordered mandatory evacuations for coastal communities by 8 p.m. Sunday. A mandatory evacuation order is in effect for residents in Zone A areas in New York City and the NYC MTA will shut down all subway, bus, and commuter railroad service at 7 PM, Sunday, Oct 28th.

NOAA forecaster Jim Cisco, who coined the nickname Frankenstorm for Sandy, said last week: “We don’t have many modern precedents for what the models are suggesting.” The so-called “Perfect Storm” of book and movie fame was similar to this one, but that storm (in 1991) never made a direct hit on the United States but still caused hundreds of millions of dollars in damage. 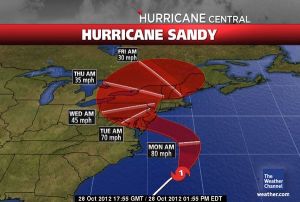 As of Sunday 28-Oct mid-afternoon, the center of Sandy is located about 575 miles south of New York City moving toward the northeast. It should turn toward the north and then northwest tonight and early Monday, and will be near the coast Monday Night. Most officials feel it will make landfall somewhere in New Jersey, but since it’s such a massive storm it will impact multiple states as it moves inland.

And the storm will take its time leaving. The weather may not start clearing in the mid-Atlantic until the day after Halloween and Nov. 2 in the upper Northeast, Cisco said. “It’s almost a weeklong, five-day, six-day event,” he said from a NOAA forecast center in College Park, Md. “It’s going to be a widespread, serious storm.”

It is likely to hit during a full moon, when tides are near their highest, increasing the risk of coastal flooding. And because many trees still have their leaves, they are more likely to topple in the event of wind and snow, meaning there could be widespread power outages lasting to Election Day.

Weather.com and the National Hurricane Center are forecasting:

Destructive Wind Potential – Winds will be strong over a very large area and capable of downing or damaging many trees and possibly blowing out windows in skyscrapers. Power outages are expected to be widespread and could last for days so be sure to charge cell phones and have any other supplies you may need. Wind damage will spread well inland, especially over higher terrain, due to the extremely large size of Sandy. In some areas, sustained winds of 30 to 50 mph could last for more than 24 hours. Gusts may top 75 mph.

Heavy Rain Potential – Widespread heavy rainfall will likely lead to flooding problems in some areas. Rainfall amounts of 3 to 6 inches are expected to be widespread in parts of the Northeast and Mid-Atlantic with locally 10 inches or more possible.

Coastal Flooding – There remains uncertainty with where exactly the worst coastal flooding is expected. In general, the most significant coastal flooding will occur to the north of where the center eventually moves inland. This most likely will extend from New Jersey to the New York City area and southern New England.

According to NHC’s update 3p 28-Oct: A significant storm surge is expected to occur in the mid-Atlantic states and southern New England. If the peak surge occurs at the time if high tide, the depths above ground level could reach 6 to 11 feet at Long Island Sound and Raritan Bay, and 4 to 8 feet from Ocean City, Md., to the Connecticut/Rhode Island state line, and 3 to 5 feet from there to the south shore of Cape Cod.

Heavy Snow – Yes, this setup will even wrap in just enough cold air on its western edge to produce wet snow, possibly heavy, in some parts of the central Appalachians (mountains of West Virginia and southwest Pennsylvania). Total accumulations of a foot or more will be possible. The combination of snow and strong winds will damage trees and cause power outages.

The National Hurricane Center is predicting snow accumulations of 2 to 3 feet in the mountains of West Virgina, with locally higher amounts, tonight through Tuesday night. The southwestern Virginia mountains are forecast to see 12 to 18 inches of snow.

Some things to do to prepare for Hurricane Sandy…

Download our free 57-pg ebook with tips about Emergency Plan Checklists, assembling kits for your home, office or vehicle, and dealing with Floods, Hazardous materials, Hurricanes, etc … and please share the data with others.

Resources for those in the path of Hurricane Sandy

This entry was posted on Sunday, October 28th, 2012 at 15:10 and is filed under hurricanes, preparedness. You can follow any responses to this entry through the RSS 2.0 feed. You can leave a response, or trackback from your own site.

One Response to Prepare for Hurricane Sandy NOW!