Friday Fotos with a Dangerous Twist

As we post this the U.S. has been dealing with multiple tornadoes touching down across the central plains. Spring and early summer are typically the most active months (esp. across Tornado Alley) and, to be honest, 2013 has been fairly quiet … until the past few weeks.

America has more tornado sightings than any other place in the world and averages about 1,300 tornadoes each year. And tornadoes happen year round across the continental U.S.

Although twisters are dangerous and potentially deadly, they also have a certain type of beauty that makes one appreciate the power of Mother Nature.

NASA Explanation: The scene might have been considered serene if it weren’t for the tornado. During 2004 in Kansas, storm chaser Eric Nguyen photographed this budding twister in a different light — the light of a rainbow. Pictured above, a white tornado cloud descends from a dark storm cloud. The Sun, peeking through a clear patch of sky to the left, illuminates some buildings in the foreground. Sunlight reflects off raindrops to form a rainbow. By coincidence, the tornado appears to end right over the rainbow. Streaks in the image are hail being swept about by the high swirling winds. 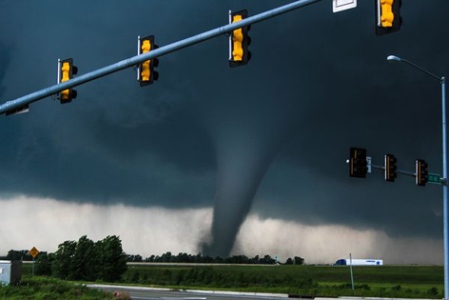 Photograph by Nicholas Rutledge via National Geographic Your Shot

NatGeo Explanation: Nicholas Rutledge snapped this picture of the devastating May 2013 tornado as it gathered strength in Newcastle, Oklahoma. It later intensified before smashing through suburbs surrounding Oklahoma City, including the city of Moore.

Above is one of the oldest known photographs of a tornado per NOAA. It is probable this image has been “doctored” from the original. Source: NOAA’s National Weather Service Collection Location: South Dakota, 22 miles southwest of Howard Photo Date: August 28, 1884

Our favorite photo by NOAA

As we mentioned in our Tornadoes don’t usually happen in December … or do they? post, the most important thing to do year round wherever you live is to pay attention to forecasts, keep a NOAA Weather Radio handy when nasty weather is brewing, and learn what to do before, during and after various types of emergencies and disasters.

Feel free to download and share some free preparedness and safety tips about tornadoes, flooding, evacuations and more from our IT’S A DISASTER! …and what are YOU gonna do about it? book

Our thoughts are with all those dealing with and recovering from the intense storms … and hope everyone has a nice, safe weekend, j & B

This entry was posted on Friday, May 31st, 2013 at 22:18 and is filed under friday fotos, tornado. You can follow any responses to this entry through the RSS 2.0 feed. You can leave a response, or trackback from your own site.