As the world hurls (Volcanic eruption safety tips and resources)

A volcano is a mountain that opens downward to a reservoir of molten rock (like a huge pool of melted rocks) below the earth’s surface.

Unlike mountains, which are pushed up from the earth’s crust, volcanoes are formed by their buildup of lava, ash flows, and airborne ash and dust.

When pressure from gases and molten rock becomes strong enough to cause an explosion, it erupts and starts to spew gases and rocks through the opening.

They can also cause earthquakes, thunderstorms, flash floods, wildfires, and tsunamis. Sometimes volcanic eruptions can drive people from their homes forever.

Fresh volcanic ash is not like soft ash in a fireplace. Volcanic ash is made of crushed or powdery rocks, crystals from different types of minerals, and glass fragments that are extremely small like dust. But it is hard, gritty, smelly, sometimes corrosive or acidic (means it can wear away or burn things) and does not dissolve in water.

The ash is hot near the volcano but is cool when it falls over great distances. Ashfall is very irritating to skin and eyes and the combination of ash and burning gas can cause lung irritation or damage to small infants, the elderly or people with breathing problems.

BEFORE A VOLCANIC ERUPTION:

Learn alert levels – Ask emergency management office which volcano warnings or alert levels are used since they vary depending on where you live (can be alert levels, status levels, condition levels or color codes).

Make a plan – Develop a Family Emergency Plan and Disaster Supplies Kit. (Note: Put in goggles or safety glasses and dust masks for each family member to protect eyes and lungs from ash.) Download a free 67-pg PDF portion of our 266-page book that includes tips on making a plan and kit and more.

Be ready to evacuate – Listen to local authorities and leave if you are told to evacuate.

DURING A VOLCANIC ERUPTION:

Listen – Do what local authorities say, especially if they tell you to leave!

Leave – If you are told to evacuate, DO IT! Don’t think you are safe to stay home … the blast can go for miles/kilometres and cause wildfires and other hazards!

Watch out – Eruptions cause many other disasters:

IF INDOORS – Stay in, but be aware of ash, rocks, mudflows or lava! 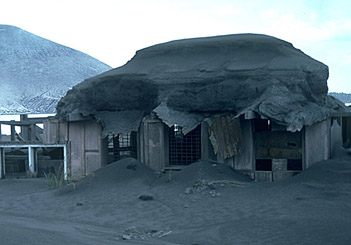 IF OUTDOORS – Try to get indoors, if not…

IF IN A VEHICLE – Avoid driving unless absolutely required.

AFTER A VOLCANIC ERUPTION:

Listen – Local authorities will say if and when it’s safe to return to area (especially if you had to evacuate) and give other updates when available.

Water – Check with authorities before using water, even if eruption was just ash fall (gases and ash can contaminate water reserves). Don’t wash ash into drainpipes, sewers or storm drains since wet ash can wear away metal.

What to wear – If you must be around ash fall, you should wear long sleeve shirts, pants, sturdy boots or shoes, gloves, goggles (or safety glasses) and keep your mouth and nose covered with a dust-mask or damp cloth.

Ash – Dampen ash before sweeping or shoveling buildup so it’s easier to remove and won’t fly back up in the air as much – but be careful since wet ash is slippery. Wear protective clothing and a dust mask too. Realize ash can disrupt lives of people and critters for months.

Above extracted from IT’S A DISASTER! …and what are YOU gonna do about it? by Bill and Janet Liebsch ~ learn how to order books and download a free 60-pg portion in PDF

The text message fiasco in Hawaii warning residents about an incoming ballistic missile was a false alarm caused by human error.

Unfortunately the FCC probe suggests Hawaii did not have “reasonable safeguards or process controls in place,” so officials at all government levels will work together to do what’s necessary to fix them.

Also we imagine emergency management officials nationwide are reviewing their operations, communications and Integrated Public Alert and Warning System (IPAWS) plans, and more since this was a regrettable but teachable moment.

While reading posts and comments on social media we noticed that many people are wondering what they should do, where they should go, and what types of shelters are best in case of a missile attack.

The CDC says during radiation emergencies people should “Get Inside, Stay Inside and Stay Tuned”. Basically those within the blast zone of Ground Zero (depending on the size of the nuke) won’t make it … BUT … if you are a few miles outside the zone your chances of surviving it are high as long as you…

In other words, you can survive a nuclear attack … but you must make an effort to learn what to do!

Two key things are planning to stay sheltered for at least 48 hours or more with proper shielding and having detection devices to monitor levels of radiation. By learning about potential threats, we are all better prepared to know how to react if something happens.

Learn more in our blog post called “How to protect yourself from nuclear fallout (tips about radiation, building an expedient shelter, etc)” and please share the data with others.