About half of the town’s 500 homes were feared destroyed by the blaze, which began early Friday evening and had spread to 8,374 acres by early Monday. All of Yarnell and the neighboring Peeples Valley were evacuated. Fire crews reported no containment as of Monday morning (1-Jul-2013).

The National Fire Protection Association website lists the last wildland fire to kill more firefighters as the 1933 Griffith Park fire of Los Angeles, which killed 29. The most firefighters — 340 — were killed in the 9/11 terrorist attacks in New York.

The Granite Mountain Hotshots, established in 2002, were an elite ground firefighting crew known for their innovative problem-solving and history of safe, aggressive fire suppression.

Members of the crew were highly trained, came from diverse backgrounds, and worked long hours in extreme environmental conditions doing the most demanding of fireline tasks.

According to The Daily Courier…

Prior to the Yarnell Hill fire which took nearly all of their lives, the team had just returned from a wildfire in New Mexico.

Just one week ago, the same crew also led the charge against the massive Doce fire in the Prescott National Forest.

We’d like to take a moment to extend our condolences to the elite fallen firefighters, their families, the cities of Yarnell and Prescott and the entire firefighter nation. Words can never adequately express the gratitude we have for all first responders who sacrifice so much to help keep us safe. Our thoughts and prayers are with all those impacted by this and other wildfires ravaging the nation. Bill & Janet Liebsch, FedHealth, Tucson AZ 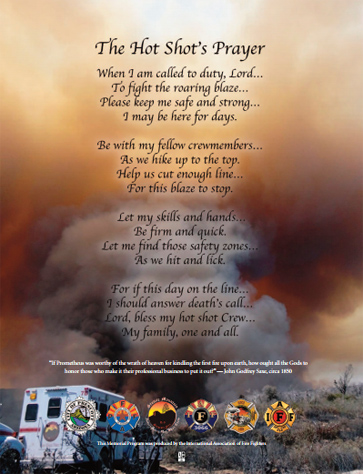 Memorial Day is a day of remembering and honoring the men and women who died while serving in the United States Armed Forces.

Formerly known as Decoration Day, it originated after the American Civil War to commemorate the Union and Confederate soldiers who died in the Civil War. By the 20th century Memorial Day had been extended to honor all Americans who have died while in the military service.

Communities around the country will be holding events all weekend from parades to memorials to honor those who have died in military service. And many volunteers including active duty military, Boy Scout troops, American Legions and others will show their respect for the fallen by placing a small flag on each grave in 146 national cemeteries across America.

For example, each year for the past 40 years, the 3rd U.S. Infantry Regiment (The Old Guard) has honored America’s fallen heroes with the “Flags In” tradition by placing American flags before the 260,000 gravestones and 7,300 niches of service members buried at both Arlington National Cemetery and the U.S. Soldier’s and Airmen’s Home National Cemetery just prior to Memorial Day.

Below: A mourner, believed to be Air Force Reserve Captain Teresa Dutcher, lies at the grave of her son Corporal Michael Avery Pursel at Arlington National Cemetery in Arlington, Virginia. She visited the cemetery at the conclusion of the “Flags In” event on May 24, 2012 per PDN. 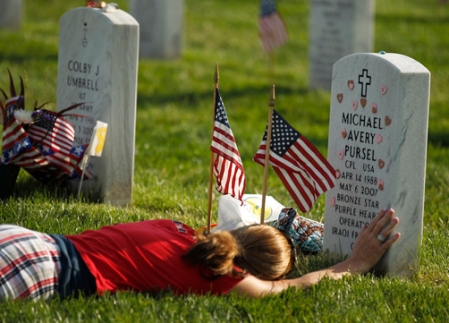 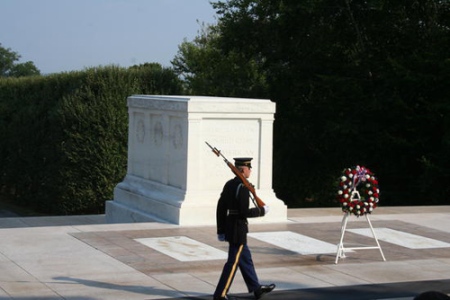 An amazing photo that went viral a few years ago was taken by amateur photographer Frank Glick was on his way to work. He drove through Fort Snelling National Cemetery early one morning and spotted a bald eagle through the mist, perched on a gravestone, and snapped shots with his aging but ever-present camera, according to the Star Tribune. An acquaintance saw the photo and suggested that he see if the deceased soldier had any living relatives who might want it. Indeed, Maurice Ruch’s widow was alive and well and delighted to receive a copy of the eagle watching over her beloved husband. 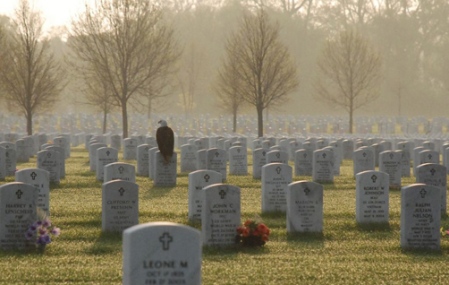 Words cannot properly express the gratitude for all those who have sacrificed so much… but please remember to take a moment this long weekend to honor our nation’s fallen heroes.

We wanted to share this news item from the NFFF website … and continuing to send our thoughts and prayers to all those lost and affected in last week’s plant explosion.

In light of the tragic event in West, Texas on Wednesday and in cooperation with local support efforts, the National Fallen Firefighters Foundation has established a national fund to accept monetary donations to assist the survivors and coworkers of the fire and EMS personnel who died in the line of duty.

Checks can be mailed to:

Donations also can be made by credit card at www.regonline.com/westtx. All donated funds will be used to assist the survivors and coworkers to rebuild their lives and support the programs and services they will need.

As a result of the blast, the station along with the apparatus, equipment and turn-out gear were destroyed or badly damaged. If you would like to donate these items, please send a message with your contact information to www.firehero.org/contact and the Foundation will share this with the West, Texas department.

“This fire and explosion have devastated the entire town in which so many people know and care about each other,” said Chief Ron Siarnicki, executive director of the NFFF. “We want to ensure the survivors and coworkers of those who died in the line of duty know that the entire fire service family is holding them in our hearts and doing all we can to offer support.”

As part of the Foundation’s mission to assist the survivors of the fallen, the Texas LAST (Local Assistance State Team) was activated on Wednesday night to provide support to local officials and public safety personnel in West.

The United States Congress created the NFFF to lead a nationwide effort to remember America’s fallen firefighters. Since 1992, the non-profit foundation has developed and expanded programs to honor fallen fire heroes and assist their families and coworkers. The NFFF also works closely with the U.S. Fire Administration to help prevent and reduce line-of- duty deaths and injuries. For more information on the Foundation and its programs contact us at 301-447-1365 or visit www.firehero.org.