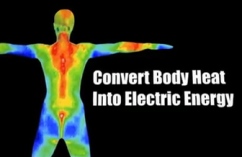 Did you know … someday the heat that YOU produce might power your personal electronics..?!

“We absorb the heat from your body, and that heat is funneled through a thermoelectric generator that converts it into electric power,” says Perpetua Power Vice President Jerry Wiant. The result: a single, square-inch TEGwear chip generates enough power (up to 3 volts) to run anything from the accelerometer in your pedometer to the wireless headset for your smartphone.

The physics behind TEGwear is basic: Your body is always generating heat, even when you are asleep. And heat, regardless of the source, excites electrons. The flow of electrons, in turn, generates electricity. The tricky part is harnessing enough electricity to power a small device. Wiant says TEGwear will do just that, as long as the chip is either touching your skin or separated from it by only a thin layer of clothing.

TEGwear-powered devices are still in development and won’t hit the market until 2014. But this clean technology has many potential applications, from mobile health to national security.

The company demo’d the device on a new Swatch Touch watch at the annual Consumer Electronics Show in Las Vegas a few months ago. In addition, they have a grant from the National Science Foundation to develop a prototype wristband to track Alzheimer’s patients as well as funding from Department of Homeland Security’s Science and Technology Division to power wearable devices used for surveillance operations.

They have also partnered with several private companies to develop body-powered smartphone accessories (like headsets), health-monitoring devices (such as wearable heart-rate monitors), and military applications (like monitoring a soldier’s vital signs and location while on a combat mission).