This week we are paying tribute to an elite force of warriors bravely serving our country.

According to ForeignPolicy.com , dogs have been fighting alongside U.S. soldiers for more than 100 years, seeing combat in the Civil War and World War I. But their service was informal; only in 1942 were canines officially inducted into the U.S. Army. Today, they’re a central part of U.S. efforts in the Middle East — as of early 2010 the U.S. Army had 2,800 active-duty dogs deployed (the largest canine contingent in the world) — and currently there are about 600 military working dogs (MWDs) working with troops in Afghanistan. 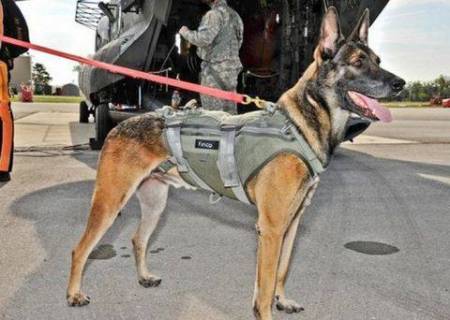 Cairo, like most canine members of the elite U.S. Navy Seals, is a Belgian Malinois. While German Shepherds are still used in the military, the lighter, stubbier Malinois is considered better for the tandem parachute jumping and rappelling operations often undertaken by SEAL teams.

SEAL dogs are even trained parachutists, jumping either in tandem with their handlers or solo, if the jump is into water. Last year canine parachute instructor Mike Forsythe and his dog Cara set the world record for highest man-dog parachute deployment, jumping from more than 30,100 feet up – the altitude transoceanic passenger jets fly at. Both Forsythe and Cara were wearing oxygen masks and skin protectors for the jump. Here’s a photo from that jump, taken by Andy Anderson for K9 Storm Inc.

K9 Storm Inc. has a deserved worldwide reputation for designing and manufacturing probably the best body Armor available for police and military dogs. 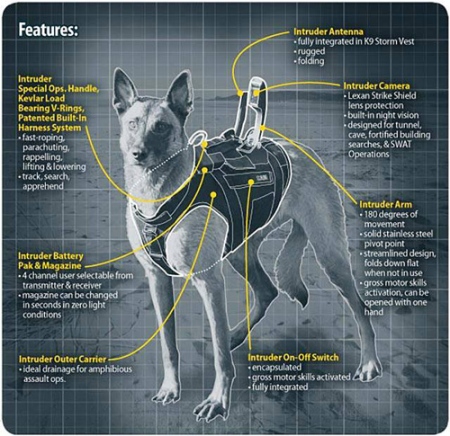 Below is one of our favorite MWD pics: A U.S. Army soldier with the 10th Special Forces Group and his military working dog jump off the ramp of a CH-47 Chinook helicopter from the 160th Special Operations Aviation Regiment during water training over the Gulf of Mexico. DoD photo by Tech. Sgt. Manuel J. Martinez, U.S. Air Force. 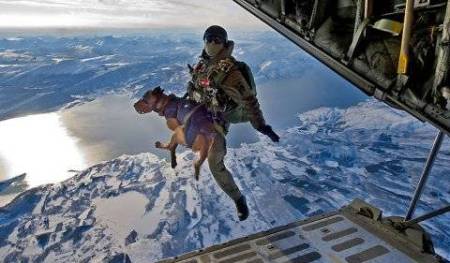 Last night (21-Feb-2013) Animal Planet aired Glory Hounds introducing viewers to several military working dogs and their handlers on the front lines. It was a two-hour, first-of-its-kind special with AP’s filmmakers and embedded camera crews having unprecedented access to MWD teams in some of the most volatile regions in Afghanistan. 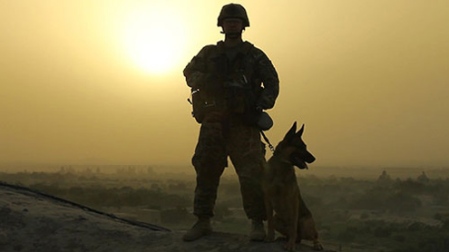 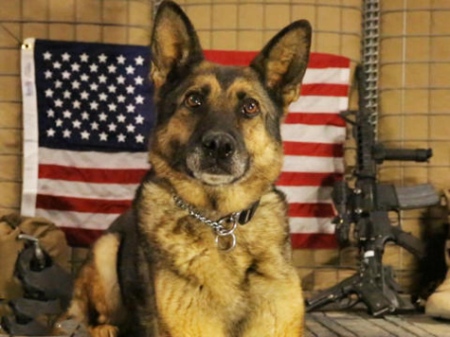