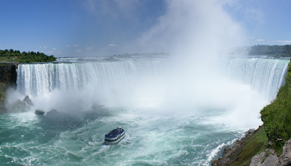 For this week’s Friday Fotos we’re sharing some interesting views of Niagara Falls ~ esp. in video at bottom.

According to Wikipedia, Niagara Falls is the collective name for three waterfalls that straddle the international border between Canada and the United States; more specifically, between the province of Ontario and the state of New York. They form the southern end of the Niagara Gorge. 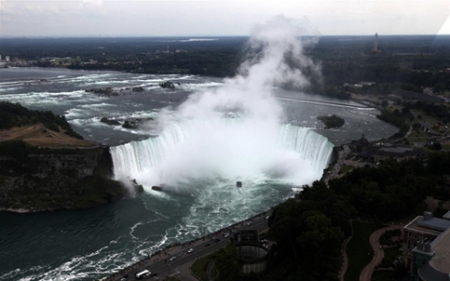 Falls from the Skylon elevator

The Falls at night

Falls on USA side

We also found an amazing vid by questpact who explains “this video was taken from an Unmanned Aircraft System (UAS) operating in US and Canadian Restricted Airspace. Operating a UAS in this airspace presents a hazard to other aircraft and people and requires specific approval of the FAA and other agencies.”

His video provides some fascinating aerial views of Niagara Falls from his remote control helicopter. Enjoy! j & B

Our good friends and partners at Wisecast Television are launching a new XPLORE Channel called “The Oceanographic”, a free 24-hour channel dedicated to showcasing the work and purposes of many organizations involved in oceanography and related ventures.

Wisecast TV’s new Oceanographic channel, sponsored in part by Fedhealth, will offer programming from dives and new technologies to studies of ocean dynamics that help satisfy underwater curiosities and empowers viewers to understand more about the ocean realm.

In honor of this channel, we wanted to share some cool and strange sea critters in today’s Friday Fotos segment.

Back in 2010 scientists from 80 nations collaborated to assess the diversity and abundance of species in the world’s oceans, undertaking 540 expeditions and countless hours of research. The Census of Marine Life, which took over a decade to complete, contains observations on more than 120,000 marine species, from giant squid to 38,000 types of bacteria found in one litre of seawater. The above Lizard Island Octopus is just one striking specimen discovered at the Great Barrier Reef.

The blob sculpin’s name may not be flattering but it does capture a bit of the animal’s essence. The 2-foot-long (60-centimeter-long) fish is rather reclusive and not often seen, but blob sculpins have been known to dote on their young. Scientists have observed males guarding rocky seafloor nesting sites, filled with hundreds of pale pink eggs, in mile-deep waters off the California coast.

A sharp-toothed pacu fish was recently caught in the Danish-Swedish strait of Oresund, putting swimmers on edge because of its resemblance to a piranha. But Scandinavian fish experts say this fish is a mostly vegetarian cousin of the piranha munching on fruits, nuts and the occasional fish or small invertebrate. But its human-like teeth are sharp enough to chomp through a fishing line or even a finger, according to a release put out by the university. They also have advised swimmers that if they do venture in the water they should “keep their pants on.”

Leafy Sea Dragon is one of the few sea creatures with its own built-in camouflage. The tiny fins that are used to propel our leafy friend forward are impossible to see, giving the illusion that you are merely watching some seaweed lazily float by. So the next time you see a chunk of seaweed … notice the beauty of it, yes. But also notice that you may just be witnessing one of the weirdest sea creatures in the world.

The Banded Piglet squid swims “upside down” compared to other squid, leaving him resembling a Muppet with his tentacles as the hair, the syphon as the nose, and his patterning appearing to be a smile. These cute little guys live at least 100 m below the surface. Because of those incredible depths, it has to create its own light from the photophores underneath its eyes. Unfortunately, because it lives so far down, not much is known about its life cycle or eating habits.

Stay safe and have a great weekend everyone! 🙂 j & B